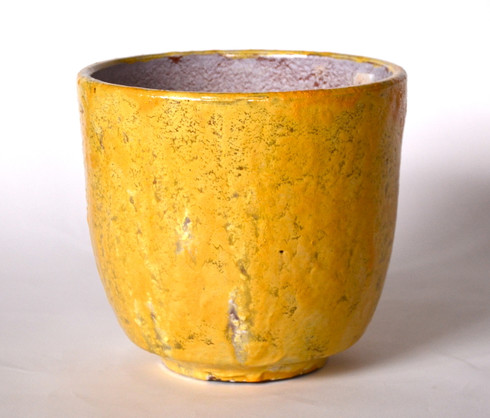 A rare example of the work of the Austrian/Dutch potter Lea Halpern (1899-1986) an art pottery in yellow glaze.

Known in the Netherlands as the van Gogh of potters, Ms. Halpern liked simple shapes and complex surfaces. She considered herself to be an artist and never intended her pots to be used. She gave them names like ''Rainy Day,'' ''Black-Eyed Daisy,'' ''Comet'' and ''Spider's Web.'' Schooled in painting, modeling and ceramics in Vienna, she worked in Gouda, the Netherlands, until World War II, experimenting with glazes, special effects and innovative pigments. The quality of her work was recognized early; both Queen Emma and Princess Juliana bought work at her first show in 1931. The following year the Stedelijk Museum in Amsterdam gave her a one-woman show and bought some vases.