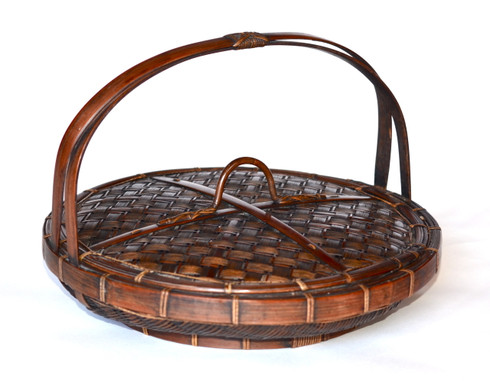 Hayakawa Shokosai I (1815 - 1897) was one of the first bamboo artists to sign his works and was prominent in the literati world of sencha tea in Osaka. His entry at the 1st National Industrial Exposition in 1877 won the Phoenix Prize; when the Meiji Empress purchased that basket, Shokosai’s reputation was made. His work tends to be restrained and quiet in style and coloration, relying on masterful weaving and the classical plaiting vocabulary of karamono style baskets.

A lidded split bamboo circular form with handle, woven of finely split bamboo and rattan and signed on the reverse with an incised signature by the artist, Hayakawa Shokosai I.

“Ransho” means “the master of all masters”, Hayakawa Shokosai I was given that recognition. The creative Japanese bamboo art tradition of innovation and excellence begun by him expanded for 150 years and continues still today. The fifth generation in the artistic lineage, Hayakawa Shokosai V, is a National Living Treasure of Japan.