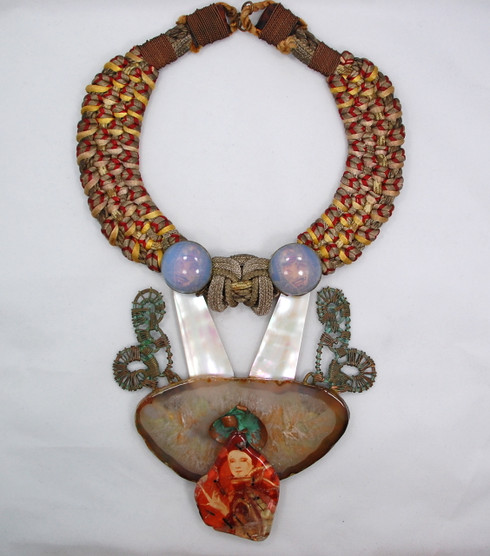 Alex Mate and Lee Brooks met in 1970 and became partners in life and work, which led to a 23 year long collaboration, interrupted tragically in 1992 by Alex’s death. The intimacy of the relationship was perhaps the single most important element, which allowed them such incredible fantasy and freedom apparent in the works. “ Within the meditation of Love and Peace lies our inspiration for creation. We view our jewelry as devotional talismans to adorn the temple of the body."

It was the early 1970s and the artists living in San Francisco, established their place in the Art to Wear movement championed by their friend Sandra Sakata and her legendary store Obiko. The line was soon admired by many tastemakers such as Erte', Grace Slick, Cher, Elton John, Joan Baez, Vincent Price and Dali with his wife Gala.

The legacy of Alex & Lee embraces artistic expression and craftsmanship---the antithesis of banality and homogeneity. The essence of the brand is imagination and creativity and its relevance exists outside the realm of trend and season. Each piece embodies this spirit and exists as a talisman beyond the constraints of time.